Buriram Rajabhat University is located on 349 Jira Road, Naimuang sub-district, Muang district, Buriram province near the City Hall. The university is situated on a plot of land covering 297 rai, 1 ngan and 27 square wah (about 475,604  square meters).

This plot of land was originally used as an airport of the Thai Royal Air Force. Later on the western part of the land was donated to the Special Operating Agency under the Provincial Police Constabulary and the Office of Accelerated Rural Development while the eastern area was given to Buriram province for utilizing it as a location for Buriram Teachers’ College.

Buriram Rajabhat University was initially named as “Buriram Teachers’ College” which was established in line with the needs of government officials and local people led by the former provincial governor, Mr. Surawuthi  Bunyanu and members of parliament in Buriram constituency. It was set up in response to Thailand’s great demand of producing a large number of qualified teachers. 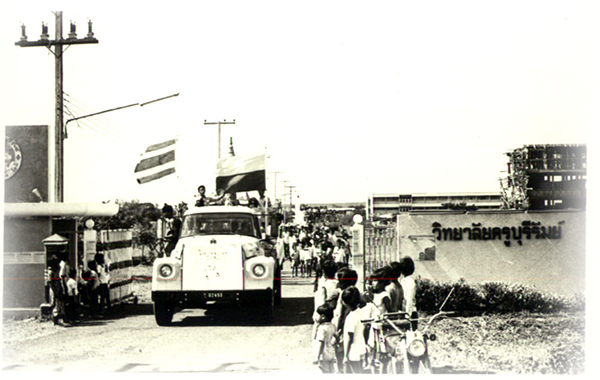 The college was founded in October 1971 and in 1972 Nine million baht was allocated for constructing one instructional building, three dormitories and one college shop. Besides, the necessary infrastructure such as streets, electricity and tap water etc. was also provided.

The college establishment on 6 October 1971 was cooperatively initiated by the following founders: Instructor Witcha  Attasat (later on appointed as the principal, director and the first college president, respectively), Dr. Phon  Khampang, Instructor Narong  Wichathep, and Assistant Professor Chenwit  Phasuk.  In 1972 the first batch of students at the vocational level was admitted to study here. Two categories of the students were divided: 455 ordinary class students and 1,358 evening class students, and there were 44 permanent teachers. In the academic year 1973 the courses for higher vocational certificate for both ordinary and evening classes were offered.

In 1976 Buriram Teachers’ College was administrated in line with the Teacher College Act B.E. 2518 (1975). Responding to its new status, the college director position had been changed to “President”. Division was replaced by Faculty and Department. The President Office was also set up. All courses were taught according to the new curriculum suggested by the Teaching Training Council, and the academic year of a three-semester system was changed to a two-semester system.

In 1978 Buriram Teachers’ College opened the two-year degree courses (Bachelor of Education) for the first time. Six major subjects i.e. English, Thai Language, Social Sciences, Physical Education, Arts and General Sciences were offered. These courses were also provided to permanent teachers on weekends in the second semester of the academic year 1978 under the project “Permanent Teachers Training”. In the consequent year, the Permanent Teachers Education Center was established at Roi-et School in Roi-et province.

In 1981 the four-year degree courses (Bachelor of Education) were introduced. Two major subjects i.e. Thai Language and General Sciences were offered. Three new courses at a higher vocational level: Library Science, Community Development and Co-operative were also carried out. However, the vocational courses were closed down in this year.

In 1984 the college expanded the educational base to the range of “the occupational techniques” by opening the following courses at a higher vocational level  such as Food, Construction, Agriculture and Works of Art etc.

In the same year the Teachers’ College Act B.E. 2518 (1975) was amended. This bill allowed the college to open other courses beside the educational sciences. Therefore, other fields for both diploma and bachelor degrees such as Animal Nourishing, Economics, Co-operative, Community Development etc. were carried out, and three degrees i.e. Bachelor of Education (B.Ed.), Bachelor of Arts (B.A), and Bachelor of Science (B.Sc.) were bestowed.

In 1995 the Teacher College Act was replaced by Rajabhat Institute Act. As a result, The name “Buriram Teachers’ College” was changed to “Buriram Rajabhat Institute”. Moreover, the president of the college called “Athikan” was replaced by the title “Athikanbodi” for the institute. “Department” and “Head of Department” were also changed to “Faculty” and “Dean of Faculty” respectively. The doctoral degree was proposed in this year. More importantly, the institute was strictly based on the philosophy “Higher Education Institute for Local Development”. Because of this act, Buriram Rajabhat Institute expanded a wide range of education by opening various programs useful and necessary for local development. In 1998 Master of Education in Education Administration was introduced, and in 1999 the other programs including Social Sciences for Development, Curriculum and Instruction, Business Administration, Research and Local Development, and Public Administration were initiated. 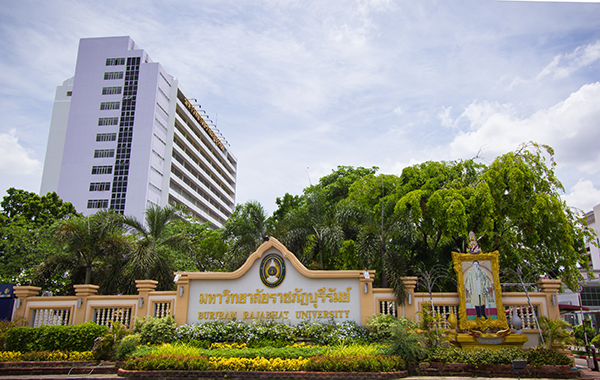 In 2004 the Rajabhat Institute Act was replaced by Rajabhat University Act, so Buriram Rajabhat University was proclaimed as a juristic person. Because of this status, the university performed flexible missions. Four councils were formed i.e. University Council, Academic Council, University Activity Promotion Council, and Council of Lecturers and Civil Servants. The university was composed of the following official administrative agencies: Office of President, Faculty of Education, Faculty of Humanities and Social Sciences, Faculty of Science, Faculty of Agricultural Technology, Faculty of Management Sciences, Research and Development Institute, Art and Culture Center, Office of Academic Service and Information Technology, and Office of Academic Promotion and Registration. Moreover, the project of establishing the Faculty of Industrial Technology as its internal school was also proposed.

The university asked permission to utilize a piece of crown property bureau land  covering 1,834 rai, 1 ngan and 32 sqaure wah (about 2,934,532 square meters) in Pakham sub-district and Huthamnop sub-district that was originally under the supervision of the Buriram Research and Breeding Station, Department of Livestock Development, Ministry of Agriculture and Cooperatives. In July 2005, the university was allowed by the Ministry of Finance to use this plot of land and had a project to develop the area and established it as the university campus for the purpose of extending educational opportunity to local communities in accordance with the university philosophy.

In 2007 the university celebrated the 36th anniversary of its establishment. The institute was fully developed like a grown-up man who was ready for work. At this time, Buriram Rajabhat University possessed instructional buildings, instruments, facilities, and lecturers who finished their master’s and doctoral degrees both in Thailand and overseas. They were also encouraged to develop their academic capabilities for acquiring assistance professor and associate professor titles.  However, the university was facing various crucial problems and obstacles as follows: A number of retired instructors increased from 2007 onwards, and their government positions were not allocated. However, they were replaced by yearly contract teachers. In the future, the government policy also tended to force Thai universities to become autonomous universities. Competitive education in this era was also very severe. There were a lot of both public and private universities offering bachelor’s, master’s and doctoral degrees as Buriram Rajabhat University did. All administrators used different strategies to persuade students to study at their universities.  Having been confronted with these challenges, Buriram Rajabhat University adjusted itself and carried out some strategies by giving students admission without taking an entrance examination and opening new interesting courses with a chance of easily getting a job such as Computer, English, Public Administration, Management, Business Administration and Accounting, etc.

Some important programs were closed because no one was interested in them, so lecturers of these programs rarely had classes while other programs were overloaded with teaching tasks. Consequently, a large number of special teachers were inevitably hired from the academic year 2008 onwards. The university had to develop its own curricula and all curricula had to be supervised by five permanent lecturers, and three out of five had to hold the degrees relating to that particular curriculum specified by the Higher Education Curriculum Benchmark B.E. 2548 (2005). As a result, Buriram Rajabhat University could not open as many courses as before because of inadequate qualified instructors. Moreover, most of the teachers who furthered their educations did not study the same fields as they did for their previous degrees since some master’s and doctoral courses that they wanted to study had not been offered. At present, the university provides teachers with scholarships for both master’s and doctoral degrees. They are also supported and encouraged to grasp their academic titles because new curricula are in demand around the country and can be opened if a number of qualified teachers are adequate.